Press Release from the Diocese of Raška-Prizren

In today’s issue of Koha (Time), one of the most respected and widely distributed daily newspapers in Kosovo, and which, at one time, sought to further the building of a democratic society and developing tolerance among Kosovo’s various communities, once again published an article which openly and unabashedly spreads ethnic and religious hatred against the Serbian people in Kosovo and Metohija and against our spiritual and cultural heritage. 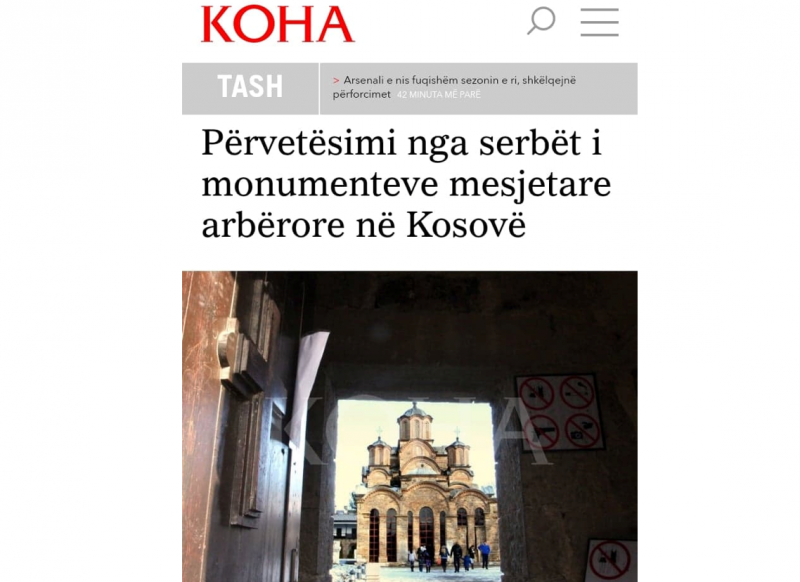 Bedri Muhadri, a history professor, wrote the openly propagandistic article, and without any evidence or rational argumentation makes the claim that the Serbian Orthodox Church’s (SOC) holy sites in Kosovo are in fact Arbëresh (medieval

Albanian), and that they are in fact usurped Roman Catholic churches, a claim which is not supported by any independent, recognized international historical authority. The message is clear. The SOC is to depart from Kosovo and Metohija together with its monks and faithful, so as to “liberate” its centuries-old holy sites, which are to become Albanian monuments. As an addition to the ethnic cleansing of 200,000 Serbs and non-Albanians from Kosovo in and after 1999, we are now witnessing an increasingly active denial and “cleansing” of Serbian cultural identity and our Church, all under the watch of the international community, with the purpose of erasing every trace that Serbs ever existed in a region where they have clearly been for centuries.

Prof. Muhadri’s pseudo-historical claim is nothing new, and has been repeatedly promoted in the last several decades by several Kosovo Albanian writers who view the SOC’s holy sites as the biggest obstacle to realizing their idea of an ethnically pure Albanian Kosovo. And yet, neither Prof. Muhadri nor any other like-minded historian offers any explanation for why Albanian extremists ruthlessly destroyed the same churches and monasteries which they now lay claim to themselves, why they would break crosses, dig up Christian graves, desecrate crucifixes and icons, if they are really so proud of their supposed Christian tradition. Such atrocities did not take place during the tragic civil wars of the 1990s following the breakup of Yugoslavia, when, unfortunately, places of worship of all faiths were destroyed. Rather, in Kosovo, these acts of desecration took place after the end of the war, in 1999 and in the years following, in the presence of international NATO forces, who are thus witnesses to such unprecedented acts vandalism and destruction. It is precisely because of such acts of violence at the hands of Kosovo extremists and a certain number of politicians who came out of their ranks that an entire annex of Martti Ahtisaari’s 2008 plan for Kosovo is dedicated to the protection of Serbian Orthodox churches and monasteries in Kosovo, which are unanimously recognized by the international community as being the SOC’s heritage. Even though some of the principles of the Ahtisaari Plan are included in Kosovo law, they are generally not respected, and are especially threatened by hate speech in the media, which is regularly published in several Kosovo media outlets, authored by several local historians.

Kosovo’s lack of adherence to its own laws and court decisions was recently one of the main topics at the meeting between the Belgrade and Priština’s leaders and the American President, where all signatories bound themselves to respecting religious freedom and the rights of the SOC. Unfortunately, with articles like the one just published in Koha, we are forced to conclude that Prof. Muhadri, along with the other sponsors of this cultural genocide, are not supporters or allies of the European Union or of the United States, as Prof. Muhadri and his cohort openly advocate for the erasing of the Serbian Orthodox identity of the centuries-old churches and monasteries here, while the E.U. and U.S. both have strong traditions of religious freedom and respect for cultural diversity. This program of erasing the Serbian identity of Kosovo’s churches and monasteries by claiming they are Albanian Catholic is all particularly unseemly given that it runs in direct conflict with the Vatican’s own clear and unequivocal stance on the matter. Last year, in response to a letter from the SOC Patriarchate in Belgrade decrying the misuse of the remains of an Orthodox Church in Novo Brdo on the part of local Albanian Catholics, the Papal Nuncio responsible for Kosovo, Archbishop Jean-Marie Speich, conveyed Pope Francis’s unambiguous stance that Kosovo’s Roman Catholics are not to participate in such politicized acts which endanger inter-Christian relations in Europe as well as inter-ethnic peace in Kosovo.

Unfortunately, Prof. Muhadri is but one of many of the loud voices propagating this idea for years in all spheres of Kosovo society, teaching it to younger generations, attempting to present historical falsifications as facts, despite the fact that every one of our frescoes, icons, manuscripts, together with numerous documents, testimonies of foreign travelers and historians, Turkish fermans, and other historical documents all unequivocally and unambiguously state that these holy sites were built by the Serbian Orthodox rulers of the Nemanjić dynasty, and that these have been Orthodox houses of worship in continuous use for centuries. The historical see of the SOC is even located in the Peć Patriarchate, where the graves of our archbishops and patriarchs from centuries ago can be seen even today. It is simply ridiculous to enter into a discussion on this issue, just as it is ridiculous to have to prove today that the earth is round.

Therefore, our Diocese along with the entire Serbian Orthodox Church remains firmly committed to its position that our holy sites in Kosovo and Metohija must not only be physically protected from violence and potential terrorist attacks, but also from aggressive institutional pressures and lawlessness on the part of Kosovo institutions, and especially from the hate speech which is spread via certain Kosovo media outlets. On account of these present realities, we will repeat once again that the issue of protecting our holy sites must absolutely be included in the context of the Brussels Dialogue, irregardless of where the conversation leads in terms of a political resolution. The SOC’s holy sites must be granted a special type of protection from these and other malevolent attacks, which endanger the safety, basic religious freedom, rights, and identity of both our Church and people in this region where we have lived for centuries.

Our holy sites are absolutely Serbian Orthodox and it will remain such as long as the last monastic is alive, as long as our priests and faithful are here. History cannot simply be erased with political directives, since we do not live in Enver Hoxha’s communist Albania, but in the 21st century. We have always taken the stance that our churches and monasteries should be places which are open to all people of good will, no matter their religion or ethnicity, that they should be places of reconciliation. Such was the case with Visoki Dečani Monastery, which during the war in 1999 offered protection to 200 Albanian refugees, while also protecting numerous persecuted Serbs, Roma, and Gorani. We would also truly wish that Kosovo Albanians recall the illustrious example of their forefathers, the honorable Albanian tribal leaders who protected Dečani Monastery and the Peć Patriarchate from those who would do the monastics violence, often without concern for their own lives. We would hope that Kosovo Albanians would not take as examples the so-called “heroes” of the last twenty years, who threw grenades at Dečani Monastery, who wrote Islamist graffiti on its walls and in various ways threatened the monks. Our Diocese has continuously worked for the building up of peace and dialogue, and in the same spirit we would especially now like to address young Kosovo Albanians with the message that the future must be built upon tolerance and knowing and respecting those who are different.

In any case, disgracefully scandalous articles such as the one in Koha contribute nothing to the creation of a democratic society with equal rights for all, and moreover, demonstrate the need for further long-term protection for SOC holy sites, regardless of the flow and outcome of the political dialogue. As to whose agenda Prof. Muhadri and Koha are serving, and whom they wish to harm; any intelligent and good-intentioned reader can discern for themselves. As the Ancient Romans would say, Sapienti sat (A word to the wise is enough).