A series of vandal attacks by Kosovo Albanian extremists throughout Kosovo – 5 cemeteries desecrated, a chapel torched

Only a week ago after the vandal attack on the Serbian cemetery in Kosovo Polje nr. Pristina and the desecrateion of 50 tombs, Albanian extremists continued their attacks destroying dozens of tombs at 5 Serbian Orthodox cemteries throughout Kosovo last night (20/21 Jan 2013)

1. KLOKOT: 27 tombstones were damaged in the attack of extremists at the cemetery in Klokot, near Gnjilane. The Police investigation began yesterday evening.

2. PRILUZJE: In the cemetery of the majority Serbian village of Priluzje, municipality Vucitrn, several tomstones were damaged. The largest tomb of the Andjelkovic family was completely devastated by strong explosives at 23.00 hrs last night. The parts of the marble from the tomb can be found on neighboring fields. There is a fear that some other tombs might have been mined too and the normal access to the cemetery is restricted, the local priest confirmed. The Police arrived to the site in the morning.

4. MILOSEVO: A chapel was torched last night at the cemetery in Milosevo, Obilic Municipality. Several tombstones are also reported damaged.

5. PRIZREN: 50 tombstones were smashed into pieces or overturned at the Serbian cemetery in Prizren, the local priest confirmed. Kosovo police confirmed the attack on the cemetery.

Beside the vandalism of Kosovo Albanian extremists on Serbian cemteries last night, an extremist Organization (Albanian National Army – AKSH, which was officially proclaimed a terrorist organization by the UN in 2003) issued an announcement over Facebook to destroy the Serbian Monastery of the Mother of God in Djakovica. A group of a few dozen of members of Vetvendosje and other civilians gathered nearby and tried to get closer to the church. Kosovo police in presence of KFOR prevented access to the Church. Currently, in the Monastery there are 4 elderly Serbian women (two nuns and two novices). The church compound was completely destroyed by Albanian extremists in 2004. The church and the parish home have been reconstructed in the meantime and placed under constant police protection. No other Serb residents in Djakovica live since 1999. During the last Christmas a group of Vetvendosje activists organized protest with an attempt to prevent arrival of Serb pilgrims to the church (January 6). Among other news it is important to mention an attack on the Serb municipal building in Mitrovica North. The building which is situated in an ethnically mixed neighborhood was targeted last night by two Molotov cocktails. No one was hurt in the attack. 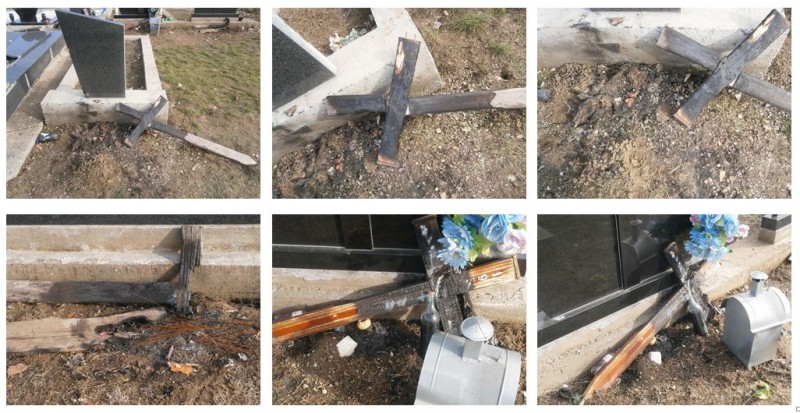 Torched crosses from the cemetery in Priluzje, central Kosovo

The Diocese of Raska and Prizren strongly condemns the lates wave of violence which reminds of the March 2004 riots in Kosovo when 34 churches were torched in two nights. As then, the attacks were cowardly and directed primarily against the cemteteries and Church sites. The last night’s events in Kosovo show that not much has essentially changed since 2004 and athat there is a still very strong potential for ethnically and relligiously motivated violence which is beeing orchestrated by extreme organizations under the pretence of pan-Albanian patriotism. As the Council of Europe is discussing the human rights situation in Kosovo these days there is a hope that the plight of Serbs and their cemeteries and other holy sites will be considered as well. A society in which extremist groups systematically target the holy sites and cemeteries for years cannot see much prosperity. For the current events the excuse cannot be found only in the tensions in Presevo valley because attacks on Serbs and their cemteries in Kosovo have been repeating for the last 13 years with stronger or lesser intensity.

This morning Bishop Teodosije requested from Prizren a higher level of protection of Serbian Orthodox religious sites and cemteries and appealed on the international community not to allow the continuation of ethnically and religiously motivated violence against the Serbian people. Such attacks, he said do not hurt only the Serbian community but also inflict shame upon the ethnic Albanian people in Kosovo. If Pristina authorities ever want Kosovo Serbs to feel at home in Kosovo the worst strategy is to allow extremist organization to terrorize its citizens of different ethnicity and religion with impunity as it has been so far

The Diocese expects that Kosovo authorities will strongly and explicitely condemn the violence and prevent its repetition in the following days.

The two photos are showing the tomb of Jelica Stevanovic, the mother of Fr. Atanasije Stevanovic from Decani Monastery. Fr. Atanasije and Decani monks visited the Prizren cemetery on January 13 and all tombstones were standing. After a short memorial service they took a photo near the tomb. Last night the tomb of Mrs. Stevanovic was desecrated together with dozens of other Serb tombs in the Prizren cemetery. Compared to other cemeteries which had been attacked by Albanian extremists before this one in Prizren was still intact although quite sad because out of 8.000 pre war Prizren Serbs only 30 of them remain in this city today.

Since our last message we have received some new information which have been confirmed by the Police too.

2. In Vitina, eastern Kosovo Albanian extremists destroyed the WWII Monunent. In WW2 Nazis created a greate Albania in which dozens of thousands of non-Albanians were killed or persecuted (particularly by the infamous SS Skenderbay Division). Destruction of the WWII monument is a very negative symbol to all who fought for the freedom regardless of their ethnicity.

3. In Gorazdevac village a group of Albanians opened fire on a Serb monument in the center of the village. The police has established the checpoint now checking all vehicles entering and leaving this Serbian village

Albanian newspaper KOHA DITORE has confirmed that the extremist group “Albanian National Army” (declared a terrorist organization by the UN in 2003 by UNSRSG Michael Steiner) called openly for the demolition of the Monastery of the Mother of God in Djakovica where 2 Serbian nuns and two elderly women live as only Serbs in this city. http://en.wikipedia.org/wiki/Albanian_National_Army

Bishop Teodosije has given a statement in which he said that the sad scenes of broken crosses in Serbian cemeteries are a painful reminder of vandalism that has been continuing in Kosovo particularly in the last 13 years. The Bishop appealed for the restraint, respect of rule of law and order and the continuation of dialogue which is the only way to resolve any problem.


Scenes from the cemetery in Prizren