The Diocese of Raška-Prizren celebrated its 1000 year jubilee on December 15-16, 2018. The jubilee commemorates 1000 years since the first written mention of the Diocese, in a chrysobull issued by Byzantine Emperor Basil II. 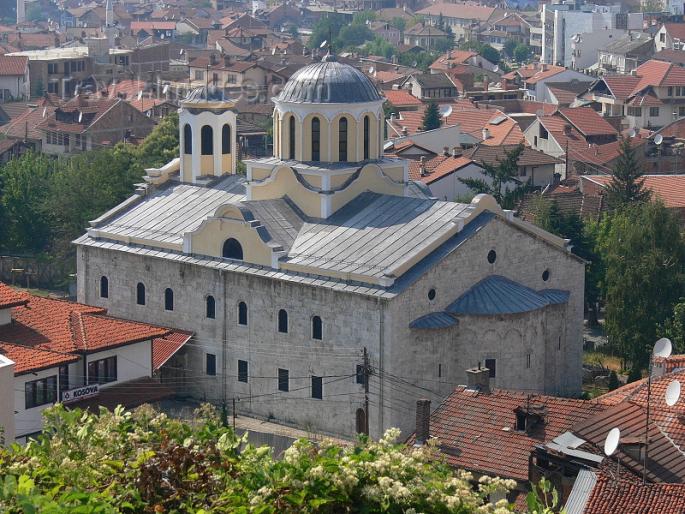 The celebrations began in the Monastery of Devič near Srbica, with the celebration of the Monastery’s feast day, Saint Joanikije of Devič. Divine Liturgy was served by Metropolitan Amfilohije of Montenegro together with Bishop Teodosije of Raška-Prizren and retired Bishop Atananasije of Zahumsko-Herzegovina, along with a large number of priests and hieromonks. The responses to the Liturgy were sung by the students of the Prizren Seminary. More than a thousand people from all over Serbia, Montenegro, and the Srpska Republic in Bosnia came to Devič to celebrate the Feast of St. Joanikije. Bishop Atanasije addressed the gathered faithful and said the the Serbian people of Kosovo and Metohija have endured some of the most difficult times, and that what is most important is to “exist at the fearful place.” “This is why I beg the people in Kosovo and Metohija to persevere, to remain and to survive in this holy land, taking refuge together by gathering under the roofs of the holy places of the Kosovo covenant.” Metropolitan Amfilohije said that the Serbian people will not be a minority in Kosovo and Metohija has long as the divine services are carried out in the monasteries, such as Devič Monastery near Srbica.Following Divine Liturgy and the agape meal at the Monastery, the festivities continued with Vespers in the Church of the Mother of God of Ljeviška in Prizren. This church was the seat of the Prizren Diocese in the first period of its existence, from 1019 to 1219. Vespers was served by Archimandrite Mihajlo, abbot of the Monastery of the Holy Archangels near Prizren, in the presence of Metropolitan Amfilohije, Bishop Teodosije of Raška-Prizren, Bishop Atanasije of Mileševa, and retired Bishop Atanasije of Zaumsko-Herzegovina, along with many priests, monks, nuns, and lay people. The service was sung by the professors and students of the Prizren Seminary.
Metropolitan Amfilohije gave a short sermon in the Church of the Mother of God of Ljeviška in which he said that the city of Prizren bears a special blessing from God, and that this church is a thousand-year old guardian of the beauty of the human soul, mind, and heart, and is a call to the transfiguration of every human being through the divine beauty which the church reveals.Following Vespers, retired Bishop Atanasije of Zahumsko-Herzegovina gave a lecture on the topic, “1000 years of the Prizren Diocese” to a full hall at the Prizren Seminary. After the lecture, all present were invited to an agape meal prepared by the professors and seminarians, during which the seminarians performed a short musical program which delighted all present.

day, on Sunday December 16th, the celebration of the jubilee was crowned with a festal liturgy celebrated in the Cathedral of Saint George the Great Martyr, at which the names of the bishops, clerics, and benefactors of the Prizren Diocese were commemorated. Hierarchical Divine Liturgy was served by His Eminence Archbishop of Cetinje Metropolitan Amfilohije, with His Grace Bishop Teodosije of Raška-Prizren, Bishop Atanasije of Mileševa, Bishop Mark of Bregalnica in the Ohrid Archbishop

ric, and retired Bishop Atanasije of Zahumsko-Herzegovina. Around 40 priests from various dioceses of the Serbian Church were present, along with many monks, nuns, and lay people from all over. The voices of the Prizren seminarians accompanied the Divine Liturgy.

At the beginning of the Divine Liturgy, Bishop Teodosije awarded Father Slobodan Đorić, a parish priest in Prizren, with the rank of protopresbyter, reading a prayer over him and giving him an epigonation as a visible sign of his honorable rank. He was made a protopresbyter because of his zeal and sacrifice during his eight years of service in the Cathedral in Prizren. His Grace Bishop Teodosije said that this celebration of ten centuries since the first mention of the Prizren Diocese is an important day not only for the Diocese, but for the entire Serbian Church and the whole Orthodox Church throughout the world.

After the reading of the Gospel, His Grace Bishop Atanasije of Mileševa said that Kosovo and Metohija is a school, a classroom, written out by the Church of Christ and the glorious works of those who pleased God. In speaking of the 1,000 year jubilee of the Raška-Prizren Diocese, Metropolitan Amfilohije said that in the in those 1,000 years, many people sowed the seeds of God’s truth in this land and watered those seeds with their martyric blood, ascetic feats, and prayers, and that because of this it should be no wonder to us that these seeds sown by the hands of God’s saints have born so many fruits through the ages up to our own time. His Eminence went on to say that Kosovo is our great hope, that our hope is buried in the grave of Kosovo, and that the Lovćen Seer of Mysteries experienced Kosovo and Metohija has an extension of Christ’s tomb from which hope for the whole world sprang forth. He also said that the tomb of Christ is felt in a living way in Kosovo and Metohija, but that wherever Christ’s tomb and power is, there will also be his Resurrection, restoration, and renewal.After Divine Liturgy at St. George’s Cathedral, all present attended a lunch held at the Prizren Seminary.