Interview of Fr. Sava Janjić, the Abbot of Visoki Dečani Monastery – Kosovo is defended by Patience too – POLITIKA daily, 28 October 2015

Kosovo is Defended by Patience too

Archimandrite Fr. Sava Janjić, the Abbot of Visoki Dečani, one of the most important Serbian Monasteries speaks for “POLITIKA” on Kosovo’s admission to UNESCO, protection of holy sites and the faith which is keeping and preserving them. 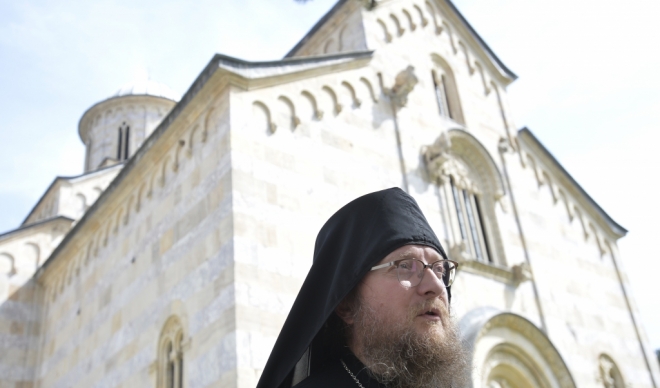 In the situation that our holy sites are under a special security regime of protection and on the list of the World Heritage in Danger essentially contradictory with a possible Kosovo’s membership in UNESCO.

Of course, we need so much KFOR which is protecting our monastery because although despite being protected by UNESCO status we have been attacked several times by grenades in the last years. Opinion of those who believe that Kosovo as a member of UNESCO will be more responsible for the protection of our sites is essentially based on wrong premises. Of course, in Kosovo there are many Kosovo Albanians who would not attack and destroy these sites but so far I have not met many who are publicly ready to recognize them as Serbian holy sites although many know that all too well. This is a serious problem of their understanding of identity. If one’s identity is built on the denial of other inevitably we may come to the situation which we had in pogrom of 2004 when not individuals but 50.000 mostly younger Albanians destroyed Christian heritage of our Church, claiming at the same time that the churches were theirs. That is why K/Albanian representatives are making so many efforts to show Kosovo as a part of Europe saying that Albanians never destroyed churches, although all over Kosovo we can still see ruins of unreconstructed destroyed churches, desecrated cemeteries and broken crosses. This what happened in Kosovo after the war is unprecedented in the history of the modern world. There were World wars in which many heritage sites were devastated, thousands of churches and synagogues. There were also wars on the territory of former Yugoslavia, for example in Bosnia and Herzegovina with many more casualties, but only in Kosovo after the war (during the peace-mission) the process of destruction of Serbian holy sites and cemeteries continued despite the international presence. This shows the best what moral credentials Kosovo presents for UNESCO membership. Those who are ready to listen will understand.

How and why a part of the international community came into a paradoxical Kosovo situation in which undisputedly recognized sites are handed over to those who destroyed them? Is that fear, political inertia, ignorance, absence of concern for those in danger or some world interests?

I think that support by some countries to Kosovo’s UNESCO bid has nothing to do with culture but it is a matter of making balance between certain political interests. Kosovo had to accept the Special crime court and the Association of Serbian municipalities, although it is being obstructed every day by teargas in the Parliament, a practice unprecedented in any democratic society. Once Albanians had a tradition of “besa” (solemn oath) but now even internationally mediated agreements are not respected. All peoples of Former Yugoslavia are going through a difficult political and moral crisis and there is an increase of extremism due to poverty and unemployment, but using open violence in such a way, against one’s own institutions only demonstrates that the same groups are ready to do the same against others and repeat attacks on Christian sites. On the international side we can see lots of political pragmatism because Kosovo is gradually sliding towards extremism and religious fundamentalism, which even Kosovo reports recognize. However, it is quite unjust that in such a situation our holy sites and our heritage become a collateral damage of political calculations.That is why we’ve been constantly saying that no matter what happens in the Paris UNESCO voting (and we steadily remain against Kosovo in UNESCO with strong arguments) the issue of institutional protection of our holy sites must be regulated in a long run within the Brussels dialog. It is up to the international community to find the best way how these agreements can be implemented in everyday life.

If one could have told you on 19 March 2004 that Pristina administration in 12 years will be at the door of the membership in UNESCO – a symbol of protection and preservation of valuable World Heritage, how would you have reacted?

After 2004 nothing can surprise me anymore. It is well known to all that the riots were organized or at least tacitly supported by some individuals in Kosovo institutions who are generously promising protection and assistance now. Hypocrisy has always been a part of political (un)culture in the wider region. However it is deplorable that open lies and propaganda which are being spread by Kosovo Government, using every opportunity to marginalize post-war destruction of Christian Serbian holy sites, can still be acceptable in the world. We have gone through many difficult times in our history but it is important for us to make our position clear. There will be always those who, if nothing else, will listen a different story and see again photos which they have either forgotten or do not want to see, and which we often see where our holy sites and cemeteries still lie in ruins.

Is this only politics? Why the holy sites in Kosovo and Metohija are so important for our people?

Today politics is present in all segments of our lives. It is our legitimate right to say the truth. Although some say that we are going into politics, we answer that we are not representing anyone but ourselves and witness reality in which we have been living in the last 15 years and much longer. With admission of Kosovo, UNESCO would eventually become a political playground of many centers of power which are waging conflict over our heads, which is not good and may lead to losing credibility of this organization if it succumbs to these pressures. For some the issue of Kosovo in UNESCO is only a matter of politics, but for us it is a matter of our life and our holy sites which are for us not only “monuments of culture” but living places of worship, centers our monastic life, the holy space in which we are meeting our Lord daily and where we have been witnessing our faith in Him. It is so with Kosovo too. It undoubtedly has political and geographical meaning but Kosovo for us is more than geography and politics. It is a symbol of our faith in Christ and not a symbol of godless nationalism which brought us all to this situation. In Kosovo we don’t only live but we live with Kosovo, with faith with which we built some of the most important monuments of civilization in the region. Our holy sites are like lighthouses in the mist of our current wandering. They remind us what we used to be, what we are and should remain if we do not want to remain on the margins of history. That is why Kosovo is defended primarily by truth, love, goodness and patience. Otherwise we may become the same as those who want Kosovo to become something else and which is alien to us.

Have the state and the Church entered the campaign against Kosovo’s UNESCO admission too late?

We are trying to say that Kosovo should not be an UNESCO member because we who have been living here are witnessing in our contacts with international representatives everyday tragedy of our people and our holy sites. For us this is not a political campaign we need to take part in but witnessing of our living faith which we experience in our liturgical gatherings in our churches, on ruins of our desecrated sites that still remain unreconstructed, like the Holy Virgin Church in Mušutište (1314) or the Holy Trinity Monastery (14th century). We have showed many times we do not want conflict or evil to anyone, which we practically demonstrated defending in war all those who suffered, regardless of their ethnicity and religion. We are ready for a dialog and have not changed our positions like some politicians often do because our convictions are not based on ideology but on our faith in God who is the only judge of truth and justice. The state is doing what they can and I know there are lot of committed people who are trying to convey the truth on our Kosovo reality to the world. Perhaps we did not go too much into media before, but as far as I know activities to show damage and danger of Kosovo’s UNESCO membership, particularly without a clearly defined mechanism of protection of our sites, has been a topic of many discussions.

Your voice is carefully listened and we have been waiting to hear it almost until the last moment. Are you afraid for the fate of your brotherhood and your Monastery?

If we would talk to media every day we would become like politicians and that is not our profession. Our Bishop Teodosije has very clearly expressed his position in his recent Communique and what I am saying now is not only my opinion but the opinion of all of us who live here. If we were afraid we would not be staying in this monastery which in the last 15 years has been targeted by grenades of Kosovo Albanian extremists nor the nuns of Devič Monastery continue to live in that holy site which was burned by their neighbors. A Christian must live in hope and faith in God regardless of the situation in which we live because our optimism comes out not from political circumstances but from our faith in God who became man, was crucified and was risen from the dead. For many this is an absurd but this is our philosophy of life which has kept our people together during five centuries of the Ottoman occupation. Current “sobering” statements of some (Serbian) intellectuals are coming from the same ideology that after the Second World War systematically worked on atheism in our society. It is exactly from these ranks that came leaders whose mistakes we are paying so dearly in Kosovo now.

Are there going to be reprisals if Kosovo does not enter UNESCO at the General Assembly, expropriation of land, administrative repression, relationship towards ghettoized communities, further obstruction of the return process?

One can never predict things in Kosovo. Our intention is not to provoke anyone. As much as we respect the right of Kosovo Albanians to express their views we think we have our right too. For us this is not a football match between Serbia and Albania but a part of our centuries’ long testimony which we will continue regardless of the outcome in the UNESCO General Assembly or some other political forum. Our property, rights of our people, all this we will defend as we have done so far using all legal means at hand constantly emphasizing that at the end of all misunderstandings both sides must sit at the table and talk. Those who believe that by force they can take or occupy anything will see that they can only humiliate themselves because we have nowhere to go from here. No one is compelling us to do that as we came from different regions to serve God here struggling primarily by prayer and truth. Our Lord once said “The truth will set you free” John 8:32 and we know that the God’s judgement is the final one.
Interview by Živojin Rakočević