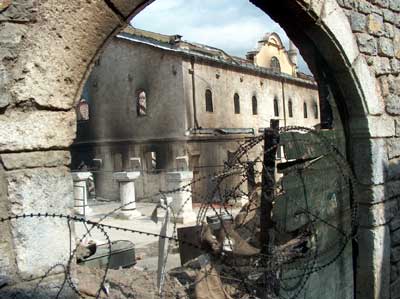 As every March 17 the Diocese of Raska and Prizren will be commemorating the 11th anniversary of the March Pogrom of 2004. In the organized action of 50.000 Kosovo Albanian rioters 19 persons lost their lives, several hundreds were wounded, more than 900 Serbian homes were burnt or damaged and additional 4000 Serbs (beside already exiled 200.000 refugees from 1999) were forced out of their homes. The extremists particularly targeted Serbian Orthodox sites. In total 35 churches and monasteries were destroyed including many holy items and icons. Regrettably, this unprecedented act of vandalism did not happen during a war-time but in the presence of the thousands of the international personnel, Kosovo Police and the UNMIK administration, none of which has ever taken responsibility for their failures. 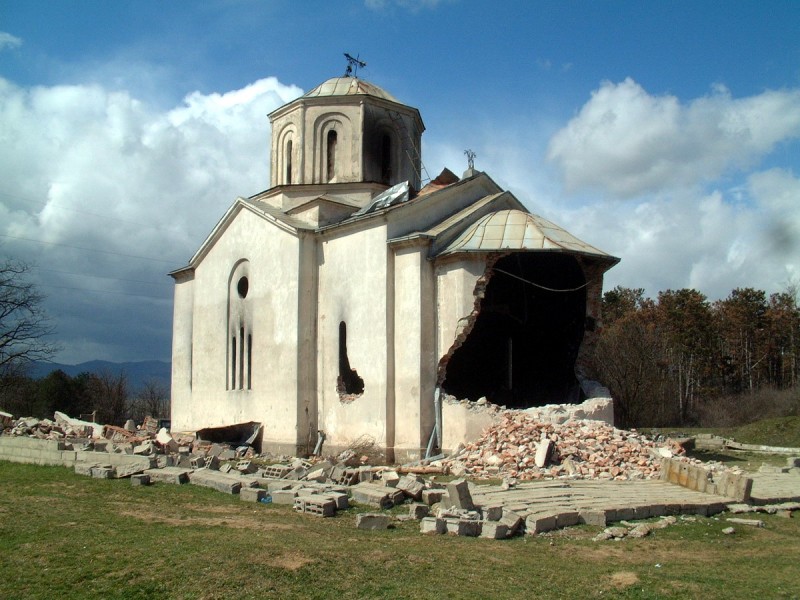 The most shocking fact is that for eleven years no serious investigation has been conducted on these acts of violence and no organizers of these massive riots have ever been identified or brought to justice although all international representatives immediatelly characterized the riots as organized. OSCE Report from 2004 particularly highlighted the negative role of the Albanian language media which instigated massive hysteria by publishing unconfirmed information and inflammatory statements of the then politicians, some of which still lead Kosovo today. Only a small number of individuals was sentenced for the damage they made. For example the group of young Kosovo Albanians who burnt the 14th century UNESCO protected cathedral of the Holy Virgin in Prizren were only sentenced on parole. The absence of a resolute action very much contributed to the continuation of sporadic acts against Serbian Christian sites in Kosovo and particularly Serb returnees in isolated enclaves. Despite of all efforts taken to improve the lives of Kosovo Serbs there is still a credible risk of a repetition of similar riots because the very existence of the Serbian Orthodox Christian heritage in Kosovo presents a problem for those who would like to obliterate it or falsify its history. Serbian Orthodox heritage has under international requests been recognized by Kosovo Parliament unter its name although a number of Kosovo officials still avoid using that name. 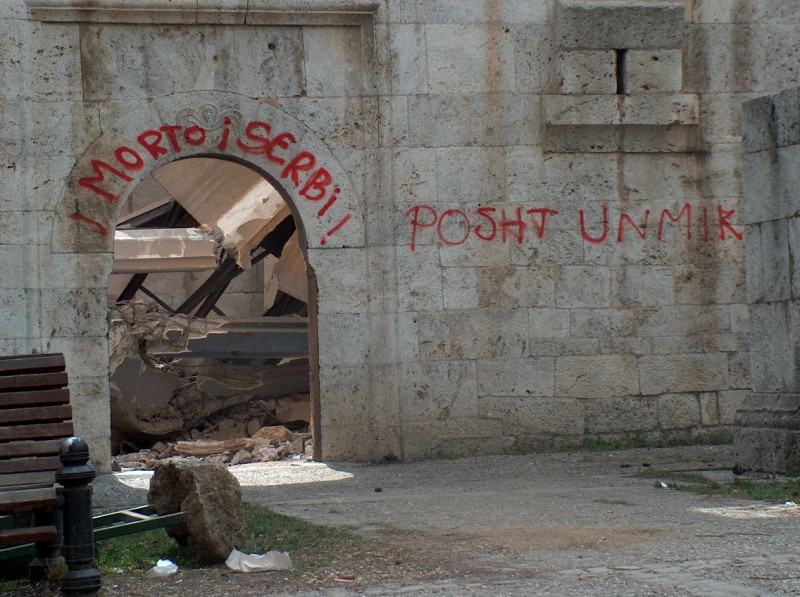 Serbian Orthodox Church endured this lastest organized wave of violence over its site with Christian dignity as it did in past. About 70% of the churches destroyed in 2004 have been reconstructed fully or partially and thanks to the international request Kosovo institutions were obliged to take part in the process under the supervision of the Council of Europe. Particular sucess is the reconstruction of the Prizren Serbian Seminary. Two largest buildings of the compound which was burnt to the ground in 2004 will be reconstructed by the funds of the European Comission. Also, in the course of the reconstruction process the parishes of Prizren, Pristina, Pec, Urosevac, Vucitrn and Istok have been revived. However, despite expectations very few if any returnees came back to their homes in 2004 because of their general feeling that there is no adequate security and ethnic tolerance in Kosovo.

March Pogrom of 2004 as it is commonly referred by Serbs was a great tragedy for the Serbian Orthodox Church but not much lesser tragedy and shame for Kosovo institutions the representatives of which still lead this society and aspire to the European future. The Serbian Orthodox Church will continue with the process of reconstruction as much as it is possible in current circumstances but exclusively on the basis of the special position and protection measures granted by the CSP and the Kosovo legislation. Due to the credible concern for the Christian sites in the current time of rising ethnic and religious radicalism in Kosovo and generally a lack of enough motivation of Kosovo leadership to protect the Serbian heritage without constant international requests and control the issue of the long term protection of the Serb heritage will sooner or later be discussed in the dialog between Belgrade and Pristina. This is especially important in the time when some Pristina leaders announce their attemts to abrrogate the protection mechanisms granted to the Church or even deprive the Serbian heritage of its name, historical and religious identity.

On the occasion of the 11th anniversary of the Pogrom there will be a memorial service held tomorrow at the church of St. Nicholas in Pristina with prayers and moments of reflection on the tragic events in the last 15 years and hope that such things will not happen again.

From the Office of the Serbian Orthodox Diocese of Raska-Prizren
March 16, Prizren-Gracanica

Shocking scenes of the destruction of the St. Andrew Serbian church in Podujevo (Kosovo) broadcasted by the Kosovo Albanian TV on March 17th 2004 will always remain a living reminder of one of the most brutal attacks on Christian sites in Europe in a period of peace not war. As in many other cases in those days the the acts of vandalism were not perpertrated by individuals but enjoyed a wide popular support of the younger Albanian population. Destruction of crosses particularly draws parallels with the tragic events in the Middle East.

Here you can download chapters of the book: “March Pogrom in Kosovo-Metohija”, published by the Serbian Ministry of Culture and (dislocated) Pristina Museum in 2004.

The Fate of Cultural Heritage in Kosovo and Metohija (PDF, size 864KB)

Cultural Properties at Risk in Kosovo and Metohija (PDF, 4.63MB)