Terrorist graffiti appeared overnight in the vicinity of Dečani Monastery

Today, around noon one of Dečani monks noticed while taking a walk along our land graffiti on the little garden house, approximately 300 m. east from the Monastery. The monks immediately alerted the MNBG West KFOR Commander Col. Minelli and the local Kosovo police. It was found out that the graffiti were written on 5 more locations on the monastery land. The most common graffiti are UCK, ISIS, AKSH (Albanian National Army), “The Caliphate is coming” and some undecipherable lines that may look like an attempt to write in Arabic. While Col. Minelli, the chief of the police and the Abbot Fr. Sava were inspecting the graffiti a group of young Kosovo Albanians who were passing on the road overlooking the monasterz land began shouting UCK in chorus. This was witnessed by both Col. Minelli and the KP commander. Later the police informed the monks that three young Albanian men were detained by the police for provocative behavior.

The graffiti were most probably written during the previous night (11/12 October). The perpetrators of this provocation most probably entered the monasterz property on the eastern side where there is no wall. Six years ago the Monastery had to stop construction of the wall on the eastern side because they were openly threatened in the press by the local UCK war veteran organization, claiming that the Monastery had no right to do so. This part of the Monastery property remains the most critical point and it is very hard to secure without at least some barbed wire or fence, before the wall is constructed.

Today’s incident comes several days after the incident at Peć Patriarchate gate where a Wahhabi person (identified as (Alegorik Muhamed Beqiri  born in 1992 from Skenderaj/Srbica, with residence in Peć/Peja) attacked and injured a local Kosovo policeman shouting “Alah u-Akbar”. On that occasion the Church learned that this man and his companions had allegedly threatened the Catholic nuns in Peć a few days before telling them that they would be slaughtered.

Dečani monks informed KFOR 2 months ago that they could see 4 vehicles full of bearded men dressed in Wahhabi style passing by the monastery on their way to the Dečani gorge. They returned soon after back to Dečani town. Today’s incident also comes six months after unknown individuals left UCK graffiti on one of the Monastery gates (24 April 2014). The perpertrators of this incident have not been brought to justice yet (NEWS https://www.eparhija-prizren.com/en/statements/uck-graffitti-painted-decani-monastery-gate-communique-diocese). Although the graffiti this time were written further away from the Monastery compound, Decani monks nevertheless remain very concerned because this incident shows that there is a possibility of an unauthorized access to the area in which the brothers work in the gardens and take care of our cattle every day.

In the recent weeks KFOR has increased the security around the Monastery with random patrols as additional element of protection to the existing checkpoints. KFOR has also mediated in a few projects that should improve the relations with the local community. This latest incident comes as a step back for all.

PRESS RELEAS BY THE DIOCESE

The Diocese of Raška-Prizren and Kosovo-Metohija has strongly condemned the Islamist and Albanian nationalist graffiti that were written by unknown individuals on the property of Visoki Dečani Monastery. This is one more in the series of many provocations directed against Visoki Dečani Monastery and the Christian Orthodox sites in Kosovo.

Bishop Teodosije has made today an appeal to the international representatives as well as the local Kosovo institutions, warning that any extremism of nationalist and religious character presents a serious threat not only for the Serbian people and the Church in Kosovo but also for all citizens in this region. Our Church, said Bishop Teodosije, expects from the international community and the Kosovo institutions to protect peace and order as well as Christian sites in Kosovo from provocations and potential acts of terror.

Serbian Orthodox Church in Kosovo has been exposed for years to acts of violence and provocations which once forever must stop, emphasized Bishop Teodosije. 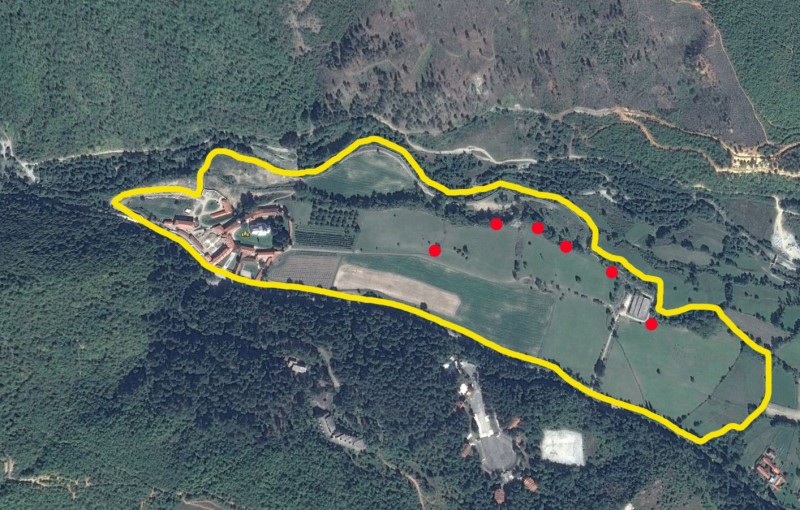 (Yellow line – the property of the Monastery; red dots – locations where Graffiti were written)