Communiqué by Bishop Teodosije regarding the Kosovo’s UNESCO bid and the most recent statement of Mr. Petrit Selimi

On the occasion of the Kosovo’s UNESCO bid and the most recent statement of Mr. Petrit Selimi, Kosovo Deputy Foreign Minister, who rejected every dialog on Serbian heritage in the Brussels dialog Bishop Teodosije of Raška and Prizren (Serbian Orthodox Church) issued today the following 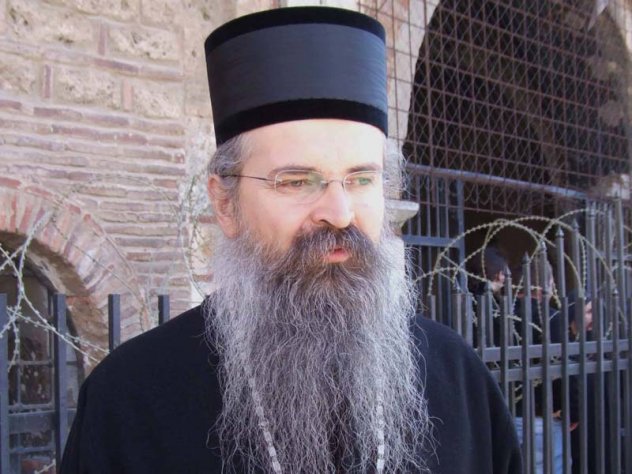 The latest statement of the Deputy Foreign Minister of Kosovo institutions Mr. Petrit Selimi in the “Danas” daily three days ago has finally revealed true intentions of Priština regarding the issue of the Serbian Orthodox relligious and cultural heritage in Kosovo and Metohija.

In his statement Mr. Selimi explicitely claims that the issue of the Serbian Orthodox heritage will not be discussed in Brussels because it was already settled in Viena within the Ahtisaari plan and that Kosovo is not willing to discuss issues that have already been settled [1].

His Holiness Patriarch Iriney of Serbia in his letter to the Director-General of UNESCO Ms. Irina Bokova on September 14, speaking about the dangers for the Serbian identity and holy sites in Kosovo and Metohija, strongly emphasized inter alia that “Serbian Orthodox Church resolutely insists that the issue of the Serbian Orthodox heritage in Kosovo and Metohija must be included in the agenda of the Brussels dialog between Belgrade and Priština ”and that SOC needs international guarantees for her heritage in this region. The Government of Serbia in the same month officially requested from the cabinet of the EU High Representative for Foreign Affairs Ms Federica Mogherini to open the dialog on the issue of the Serbian heritage and the SOC property in Kosovo and Metohija within the Brussels dialog.

Kosovo authorities responded to these concrete suggestions for a dialog which would be organized under the patronage of the EU, with a letter of the highest Kosovo officials to the UNESCO Director General on 7 October in which Kosovo institutions express comittment to the Annex V of the Ahtisaari Plan on protection of identity, property and special relations with Serbia and that the SOC will be guaranteed full protection.

The letter with the promises of the Kosovo officials was a surprise for us as it is well known that Kosovo institutions removed from the Constitution and laws all references to the Ahtisaari Plan, and therefore also Anex V and principles of protection of the Serbian heritage in 2010 and that the contents of the Anex V was only partially included in Kosovo laws which, as we know too well, may be changed and are not internationally guaranteed.

Serbian Orthdox Church could learn what are the true intentions of Kosovo institutions in April this year when Ministry of Culture of Kosovo prepared the Draft Law on cultural heritage completely ignoring the special status of the SOC sites. The same was repeated with the recent Draft Stategy on Cultural Heritage in Kosovo in the period until 2025. Although both documents were withdrown because of the SOC opposition and upon a strong international criticism, they both clearly indicate that the positions expressed in the above mentioned letter of Kosovo officials are insencere promises made only to serve easier obtaining the UNESCO status of Kosovo. Before this letter the mentioned drafts of the law and the Stategy on Cultural Heritage Priština demonstrated a brazenly opposite approach, completely denying special status of the SOC heritage.

Therefore the statement of Mr. Selimi is only additionally confirming the doubts of SOC in sincerity of Kosovo officials. Regrettably, the rejection of the dialog on Serbian Orthodox Heritage in Brussels clearly demonstrates that their goal is to become a member of UNESCO as soon as possible so that they could use their status in this organization as a tool for further cultural repression against SOC.

Having in mind the course of events, the Diocese of Raška-Prizren (SOC) strongly condemns the statement of Mr. Selimi and suggests that EU sponsored dialog on Serbian heritage in Kosovo and Metohija must be opened as soon as possible, suspending Kosovo’s accession to UNESCO. In a situation in which our heritage has no adequately internationally guaranteed protection, it is absolutely clear that the accession of Kosovo to UNESCO would be an open act of cultural repression against the Serbian heritage in Kosovo and Metohija, which in the last 15 years suffered many times from K/Albanian extremists. That was the reason why our holy sites have been for years on the list of the World Cultural Heritage in Danger. Our monasteries and churches are not and cannot be museums, but places of worship and every attempt of Priština to use force either through institutions, or encouraging anti-Orthodox sentiments will be an additional proof of their true intentions which lead towards Albanization of the overall cultural and religious heritage in Kosovo and Metohija.

Serbian Orthodox Church is ready to express to all UNESCO member states her concern over the rejection of the dialog by Priština and warn them that the eventual accession of Kosovo to this organization, particularly in the current situation with our holy sites which are, by the way, the only UNESCO sites in Kosovo and Metohija, would be an imposition of an act of occupation. After all this our Diocese cannot have confidence in Kosovo institutions and before the dialog on cultural and religious heritage we are forced to suspend direct contacts with Kosovo officials, continuing to resolve our problems with Priština through mediatin of the international representatives in Kosovo and Metohija if they show their readiness for that. Now when Kosovo Supreme Court is practically taking away 50% of the Dečani Monastery land, and our Church is facing vandal acts such was the recent stoning of the church in Orahovac, with continual thrates of demolishing of our church of Christ the Savior in Priština, we can only say that in such a way Kosovo institutions more and more complicate our lives and endanger our future in Kosovo and Metohija. The statements that Priština sends to the world claiming that Serbian churches in Kosovo are repoortedly protected and safe, are completely unfounded by the very fact that our churches are the only Christian sites in Europe under such a security regime of protection by police and NATO, which is a direct consequence of the years of K/Albanian vandalism, ethnic and religious intolerance.

Our position is not politically motivated , which we have proved these years by our readiness to work with all people of good will for the sake of protection of our people, heritage and holy sites. That is why we hope that the international community will help us all to overcome this problem opening as soon as possible a dialog in Brussels on our heritage, so that the Serbian Orthodox religius and cultural heritage in Kosovo in future will not be a stumbling stone but a bridge of reconcilliation of all well-minded people in the region.

“Will the issue of the Serbian Orthodox Heritage be opened in the Brussels dialog?
No, this issue was discussed in the Vienna dialog during the process led by the UN representative Marti Ahtisaari. Further assistance was unilaterally provided by Kosovo leaders. In the Brussels dialog no topic can be opened without explicit consent of both sides and it is sure that Kosovo does not want to discuss the issues which have already been settled. The Brussels dialog has nothing to do with UN agencies. The dialog is about mutual recognition of two states step by step.“