COMMUNIQUE OF THE HOLY ASSEMBLY OF BISHOPS ON KOSOVO AND METOHIJA

COMMUNIQUEOF THE HOLY ASSEMBLY OF BISHOPSOF THE SERBIAN ORTHODOX CHURCH 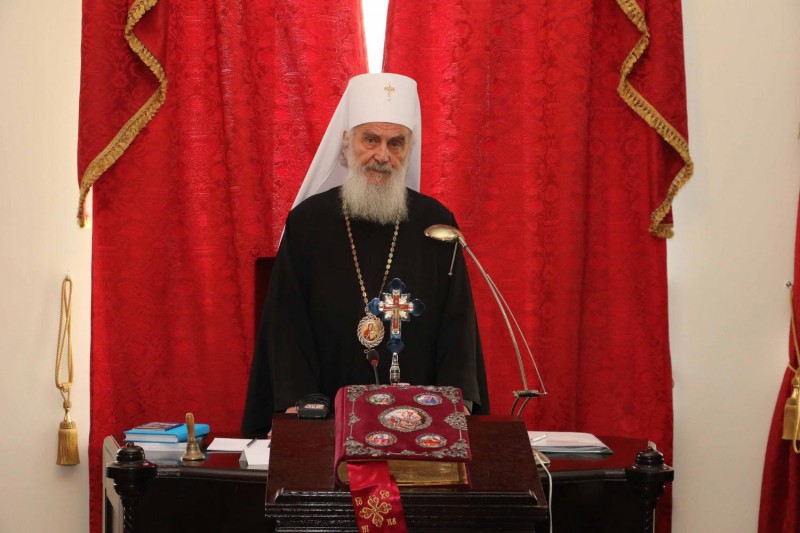 Gathered at the autumn meeting of the Holy Assembly of Bishops, we the Bishops of the Serbian Orthodox Church headed by His Holiness Serbian Patriarch Irinej in these difficult times which our Church and the faithful are facing in Kosovo and Metohija, express our support to His Grace Bishop Teodosije, his clergy, monastics and the faithful people of the Diocese of Raška and Prizren in their efforts to remain and stay in Kosovo and Metohija, the heartland of the Serbian Orthodox spirituality and our identity.

We express our concern due to the latest developments, especially many incidents, thefts and other forms of pressure against our people. We remind the international and local political representatives that they are obliged to provide a peaceful and dignified life for all citizens and not to allow any violence. Especially we emphasize the importance of the presence and active role of the international peace-forces KFOR and the OSCE mission, in accordance with the UNSC Resolution 1244, which must continue as long as normal condition for life of all communities are established in Kosovo and Metohija.

On this occasion too, we repeat the firm and unanimous position of the all members of the Assembly of Bishops of our Church expressed on the annual meeting in May 2018, that under no price one can bring under question the full sovereignty and integrity of Serbia in Kosovo and Metohija, which is granted by the Constitution of Serbia and the UNSCR 1244. For our Church, Kosovo and Metohija has never been nor can be only a political issue over which exclusively the state authorities have the monopoly. For us, Kosovo and Metohija throughout our history and today has primarily been a question of the survival of our clergy, monastics and the faithful people and, especially, our ancient holy sites without which we would never be what we are.

As we cannot discuss the survival of our people, especially the vulnerable majority of Serbs living south of the Ibar river, without the preservation of our holy sites, we equally cannot discuss the preservation of our sites only as cultural and religious monuments, the survival of which is allegedly possible without our congregation. Our holy sites have their deepest meaning only as places of liturgical gathering of our people, not only those from Kosovo and Metohija, but from all Serb inhabited regions and the world.

Our obligations towards Kosovo and Metohija today are more profound today as we have found ourselves facing increasingly stronger international pressures that our country agrees to renounce Kosovo and Metohija, either by a direct act of recognition of Kosovo or by a tacit approval that Kosovo may become a member of the UN and other international organizations. Any signature which would ultimately provide recognition of Kosovo, participation in the UN or renouncement of Serbia under any form would forever deprive Serbia of her historical rights over the area so fundamentally important for our spirituality and statehood. 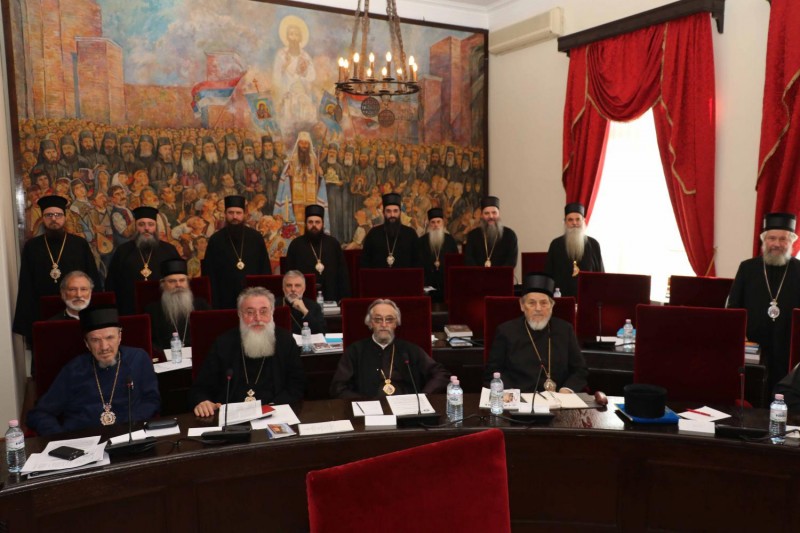 We are particularly concerned that under the disguise of a possible “delimitation between Serbs and Albanians” a possibility of a partition emerges, if not all, then the most important part of Kosovo and Metohija, which would lead to its recognition as a part of either independent Kosovo or even so called Greater Albania. Consequences of such a decision would be tragic for the future of our people and our holy sites. In such a scenario the majority of Serbs, deprived of adequate protection and security, would be forced to leave their historical homeland, where an ethnic clean Albanian society would be established with obliteration of all traces of our historical existence. The idea of the so called partition or separation of the organic unity between the Serbs south and north of the Ibar river, from other Serbs, no matter where they live, creates lots of uneasiness and a grave concern among our people and does not enjoy support of the majority of Serbia’s citizens and Serbs all over the world. Territorial partition is especially dangerous because it inevitably means creation of ethnic clean territories which would have unforeseeable consequences for the region, still recovering from the suffering and damage inflicted during the 1990ies. For this reason our Church has always supported building of a society in which peoples of different origin can live in peace, with full protection and respect of their religious, cultural and ethnic identity. 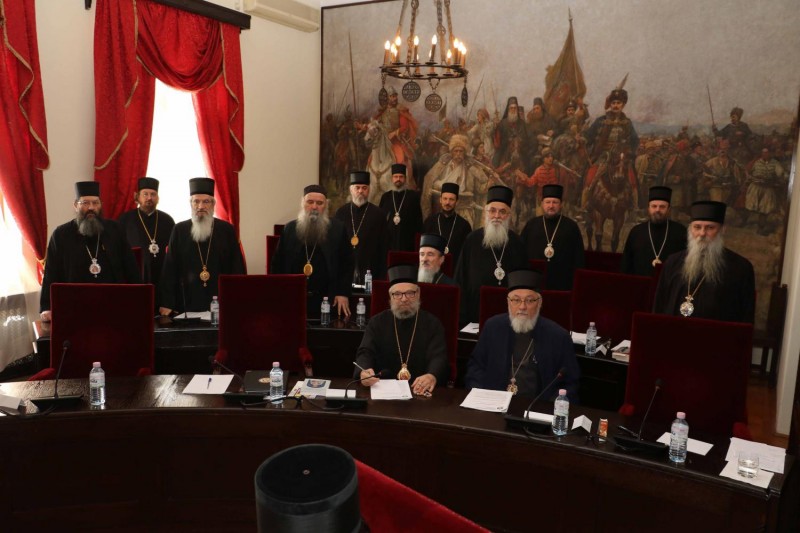 The Holy Assembly of Bishops is particularly concerned that our Church has never been officially invited to express her suggestions on the protection of our holy sites, clergy, monastics and the faithful. For years we have been insisting on adequate protection of our holy sites because we have witnessed not only the everyday blatant lack of implementation of the existing legal provisions (related to the elements of the “Ahtisaari plan” which were incorporated in the so called Kosovo legislation) even in spite of international pressures, but we can see that local self-proclaimed Kosovo institutions continue with impunity the process which is aimed at creation of ethnic clean Albanian Kosovo in which in a long run there would be no place for Serbs and other non-Albanian communities. Systematic avoidance of the accepted obligations of Priština related to the Community of Serbian Municipalities and other obligations from the “Brussels dialog” only confirm that in the current circumstances and the existing behavior towards the Serbs it would be very hard to find a long-term solution. This by no means implies “a frozen conflict” but on the contrary, we encourage a continuation of an open but carefully guided dialog which would primarily focus on protection of human and religious rights, improvement of the rule of law, strengthening of the legal security and more efficient protection of the vulnerable spiritual and cultural heritage which would not depend on the self-will of the local Kosovo institutions, but would be regulated in a more comprehensive way with an international supervision and clearly defined mechanisms of implementation of the agreed principles of protection. Also it is very hard to talk about any further dialog without creating conditions for the return of the expelled Serbs, the protection and restitution of their usurped property. Ignoring this request would mean an approval of the post-war ethnic cleaning as a done deal. Without these preconditions, it is impossible to talk about a durable solution of problems in Kosovo and Metohija. For this reason, imposing of hasty deadlines despite extremely unfavorable conditions on the ground and a very complex situation in the European Union is without any justification.

We appeal on state representatives of Republic of Serbia that instead of seeking a quick as possible settlement with Priština, pay more attention to the building of a state and national platform in the preparation of which all relevant factors of our society would participate. Only in this way the basic interests of our people would be preserved and the confidence among all crucial social counterparts in the land would be reestablished. At the same time we need to continue on building confidence and understanding with Kosovo Albanians and all other peoples of good will who live in Kosovo and Metohija, as well as other parts of Serbia, because the future of the region primarily depends on the readiness and ability of all of us to live with one another in peace and mutual respect.

With the approaching of the 800 years’ Jubilee of the Autocephaly of our Holy Church it is of paramount importance that we all remind ourselves that the statehood of Serbia has always been firmly connected with the spiritual tradition of our Church as a crucial factor of our identity throughout the history.