Roman Catholic Mass served on the grounds of the Orthodox Church of St. Nicholas in Novo Brdo – Diocese of Raska-Prizren expresses serious disappointment and protest 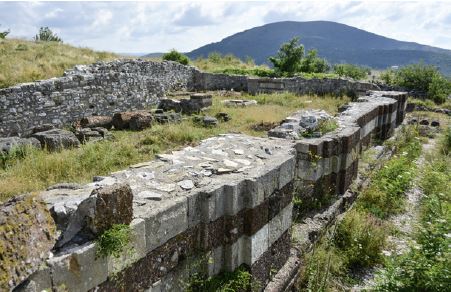 Roman Catholic Bishop of Kosovo Dode Gjergji and the Albanian Archbishop of Bar (Montenegro) Zef Gashi with their clergy and a group of believers served a mass at the remains of the Orthodox Christian cathedral of St. Nicholas in the vicinity of the Novo Brdo medieval fortress. https://en.wikipedia.org/wiki/Novo_Brdo_Fortress

The mass was attended by Ismet Hajrullahu the head of the Kosovo Institute for protection of cultural monuments. The news in Albanian was published by the Roman-Catholic Diocese at: http://www.drita.info/2019/08/02/u-shenua-dita-e-diaspores-ne-novoberd/ 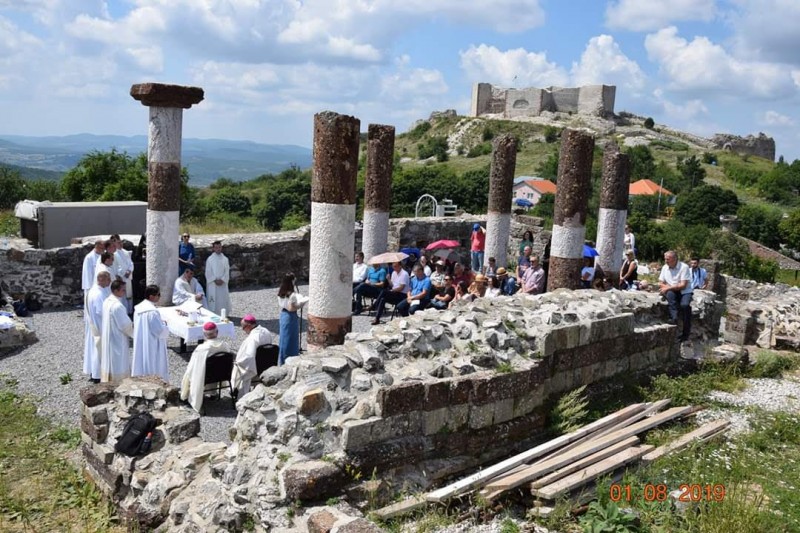 The Diocese of Raška and Prizren expressed its gravest concern and disagreement to Kosovo institutions already in June due to unauthorized works of the Kosovo Ministry of Culture (institute for Archeology) at this medieval Serbian Orthodox site which is situated within the Special Protected Zone of Novo Brdo where all works are prohibited without the consent of the Implementation Monitoring Committee and the Serbian Orthodox Church communique-raska-prizren-diocese-concerning-unauthorized-construction-work-cathedral-chur It should be noted that after the clearing of the ground the Kosovo archeologists also opened medieval tombs in the church without authorization and with no expertize erected pillars in the central part of the church. A comprehensive archeological research and excavations were done in the Yugoslav times (1950ies) and the found artifacts are stored in Belgrade, especially the remnants of the stonework with inscriptions in Cyrillic script which clearly witness about the history of the church.

All of the research done on St. Nicholas Church and its history is presented in detail in the book, “The Church of St. Nicholas—the Cathedral of Novo Brdo” by archeologists Mark Popović and Igor Bjelić, published in Serbian and in English in Belgrade in 2018. On the basis of the massive amount of historical and archeological sources cited, photographs of the location, excavated artifacts, drawings, and possible ideal reconstructions of the church, we can get, for now, the most complete picture of Novo Brdo’s Cathedral Church.This useful book in English/Serbian i available in PDF format here:  https://d.pr/free/f/34iYBL

After the most recent provocative serving of a Roman Catholic mass in the remains of an Orthodox Christian church the Diocese of Raška-Prizren with the blessing of H.G. Bishop Teodosije published the following:

The Diocese of Raska-Prizren is deeply disappointed with this apparent act of abuse of the spiritual and cultural heritage of the SOC, on a site founded and built by medieval Serbian rulers, which has been noted in numerous professional and historical literature, both domestic and foreign. Preserved stone-work artifacts with inscriptions from the church of St. Nicholas make it clear whose church it is.
By serving mass on the grounds of the Orthodox Church, the Roman Catholic Diocese of Kosovo seriously undermines hitherto fairly correct interfaith relations in Kosovo and Metohija and politicizes the heritage of the SOC, which, under the proposal of our Church, was included in the Special Protective Zone with the consent of Kosovo Albanian representatives on the proposal of our Church in 2008. The words heard at yesterday’s mass do not contribute at all to building the Orthodox Church’s interfaith relationship with Roman Catholics, and the SOC will surely have to raise this issue in contact with the Vatican’s competent representatives.
Not far from our Orthodox church are also the remains of a medieval Roman Catholic church known as the Saxon Church of the Blessed Virgin Mary, which was built and used by Saxon miners and merchants of Dubrovnik with the consent of the Serbian medieval rulers. It is quite a reasonable question why the Roman Catholic bishops and their believers did not gather on the remains of their former church, but did so on the foundations of the Orthodox cathedral of Novo Brdo, the ancient seats of Orthodox Serbian Metropolitans of Novo Brdo.
The Diocese of Raska Prizren will request from competent international and local institutions to protect the location of the church of St. Nicholas from further provocations, including the recent erection of pillars done without professional expertise and without the approval of the SOC, which is necessary for all activities in special zones under the laws of Kosovo.  Pristina authorities have already been severely criticized for not respecting religious rights of the SOC in the latest U.S. State Department report, which only confirms that this latest provocation is no exception.
The Diocese of Raska-Prizren
August 2, 2019