STATEMENT OF THE DIOCESE OF RAŠKA-PRIZREN AND KOSOVO-METOHIJA 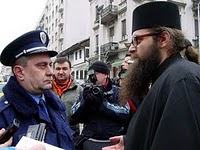 The Orthodox Diocese of Raška-Prizren and Kosovo-Metohija is in possession of verified information that monk Antonije Davidović of Crna Reka Monastery, against whom the Holy Assembly of Bishops of the Serbian Orthodox Church has repeatedly sought ecclesiastical punishment for his anti-church and unmonastic behavior, and who is now finally being brought before the High Ecclesiastical Court of the Serbian Orthodox Church, is currently residing in the region of Orahovac and Velika Hoča, where he is inciting people against the Patriarch and the Church and causing turmoil with various lunatic stories, supposedly to protect Bishop Artemije. Davidović is at the same time seeking support for himself with these activities because he is under church proceedings.

With the support of Dejan and Jovana Baljošević from Orahovac*, who offered him hospitality and are helping him spread messages of sectarian content by internet, Davidović is personally visiting Serbian families in the region and spreading turmoil, regarding which the Diocese has been directly informed by several residents of Orahovac and Velika Hoča who are anxious because of Davidović’s behavior and who do not want to take part in his activities against the order of the Church.

We wish to send a message to our faithful in the Orahovac and Prizren region not to allow individuals of sectarian and anti-church behavior to introduce distrust in your Patriarch and Church, because these are people who are thus destroying the spiritual and national unity that is so necessary to the Serbs in Kosovo and Metohija at this moment.

The activities of monk Antonije have been very unbalanced in previous years as well and the Diocese is in possession of testimonies from a number of Serbs from Velika Hoča and Orahovac who confirmed that in the most difficult moments of suffering in 1999 it was none other than monk Antonije Davidović who encouraged them to leave Kosovo and Metohija, which they did not accept and today they are still living in their homes in Velika Hoča and Orahovac.

Brothers and sisters, Serbs in Orahovac, do not listen to those who are bringing conflict among the people and creating a schism in the Church!

(*Note: Dejan Baljošević is employed by the Serbian municipality of Orahovac and he has already been advised several times not to take part in anti-church activities and the creation of divisions among the people, which he and his wife, who is an English teacher in the school in Orahovac, have chosen to ignore.)