On the occasion of the beginning of heavy construction works on the road from Dečani (Kosovo) to Plav (Montenegro) despite the Kosovo law and UNESCO heritage standards, the Government of Kosovo in a most blatant way endangers one of the prime UNESCO World Heritage Monuments in the Balkans. The Diocese of Raška-Prizren (Serbian Orthodox Church) has issued the following public statement today:

Diocese of Raška and Prizren

Serbian Orthodox Bishop in Kosovo Teodosije Šibalić informed yesterday the representatives of the EU, OSCE and KFOR that the Kosovo Government began illegal construction works on the transit road Dečani-Plav within the Special protected zone around the Monastery of Visoki Dečani. The construction of such roads in the protected zones is most severely prohibited by the Law on Special protected zones which was adopted by Kosovo Parliament. The violation of this law in addition to the denial of the Kosovo Government and the local municipality to implement the Kosovo Constitutional Court confirming the property rights of Visoki Dečani Monastery represents the most flagrant example of institutional lawlessness perpetrated by Kosovo Government. The OSCE monitoring team visited the zone yesterday and could report the damage which is being made by the work of bulldozers. The destruction of the natural surroundings in the zone is additionally problematic because the area also belongs to the National Park of Prokletije.
Dečani – Plav road was discussed several times at the meetings of the Implementation Monitoring Council (for special protected zones). The Council consists of the highest representatives of the EU and OSCE Offices in Kosovo, Kosovo Minister of Spatial Planning and Culture as well as the Bishop of the Serbian Orthodox Church in Kosovo.
The initiative for the construction of the transit road was stopped in 2014 when the then Prime Minister Hashim Thaci inaugurated works on the bypass route which was planned to go beyond the boundaries of the protected zone. The Diocese has many times reiterated the position that the Church is not against construction of roads but that the construction of the transit road right along the walls of the most important UNESCO World Cultural Heritage in the region constitutes not only the violation of the current law but an anti-civilizational act which will inflict considerable damage to Visoki Dečani Monastery. The transit rad will increase the traffic, particularly of heavy vehicles, make additional damage and pollution so the area around the monastery, one of the rarely preserved oases of peace and tranquility will be irreparably damaged. Thanks to the firm international position and the readiness of the former Kosovo Government the bypass road construction was begun and publicly opened in the presence of the mayors of Dečani and Plav. However the works were soon suspended and the initiative for the for the road construction next to the Monastery was launched by the current Kosovo Prime Minister Ramush Haradinaj. Obviously, one can hardly speak of any sense of institutional continuity in Kosovo with such contradictory decisions. The Implementation Monitoring Council has recently held two meetings on which the EU and OSCE legal analyses were presented as well as positions of the Quint countries, with a firm conclusion that the construction of the transit road is illegal and damaging for Kosovo. This position was communicated directly many times to the Kosovo Prime Minister by the highest international representatives in Kosovo.
Although the Ministry of Infrastructure showed initially readiness to go back to the bypass road project this has now been directly violated by the beginning of extensive ground works on widening of the existing village (unpaved) road with additional deforestation. Only 400 m from the Monastery a sign was placed with the name of the road project and the logo of the Kosovo Government. One can see heavy machines along the route and bulldozers cutting deep into the hillside changing the landscape which has been preserved for centuries.
It is important to mention that the EU is currently funding another transit road between Peć and Montenegro through the hills above the scenic Rugova gorge (far enough from Peć Patriarchate Monastery and the famous natural resources of the gorge). Despite this expensive project funded within the EU Western Balkans connectivity program, Kosovo Government nevertheless decided to construct another transit road just 17 km away, right next to Dečani Monastery and in contradiction to the law on Special protected zones violating the legal principles of preservation of significant cultural and historical monuments.
Therefore the latest action of the Kosovo institutions is deeply damaging confidence in the legal credibility of local institutions and the rule of law, including the decision of the Constitutional Court of Kosovo which obviously are of no meaning in Dečani Municipality. At the same time the beginning of works in the protected zone de facto blocks the work of the mixed Implementation Monitoring Council as the works are carried on opposite to the legal interpretations of the EU and OSCE Offices. 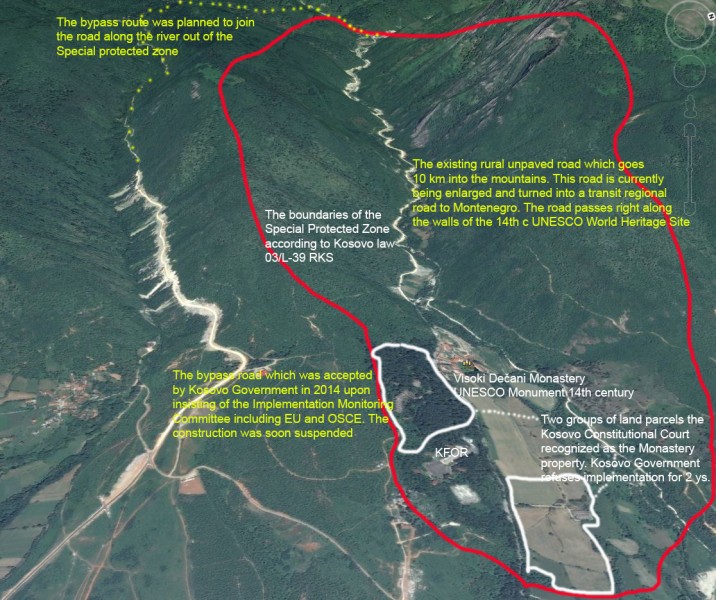 In the last 20 years (after the Kosovo armed conflict) Dečani Monastery has been under the military protection of KFOR peacekeepers because of four armed attacks since 1999 and an attempt of a terrorist action by local Kosovo Islamists in 2016 who were arrested by the Kosovo police and released the following day for illegal possession of weapons. The poor security situation, absence of the rule of law and order, ethnic discrimination and disregarding the Kosovo own laws including its highest judicial decisions is damaging not only to the citizens of Dečani Municipality but all Kosovo citizens.
If the construction works of the disputed road are not immediately stopped and the damage made by deforestation appropriately repaired the Diocese will conclude with deep disappointment that the current Kosovo laws on protection of cultural heritage are completely invalidated by the Government which paradoxically is supposed to preserve and implement them.
Diocese of Raška and Prizren, Serbian Orthodox Church
26 May 2018
Prizren – Gračanica
Kosovo law on special protected zones (in English): http://www.gazetazyrtare.com/e-gov/index.php?option=com_content&task=view&id=146&Itemid=56&lang=en
Pay attention to the Article No 3 which deals with the goals of the Law on Special Protected Zones and the Article No 5 in which among the PROHIBITED activities within the zones construction of transit roads is specifically mentioned. Compared to restricted activities which may be a matter of compromise the prohibited activities are automatically considered illegal.

The Tweet of the US Ambassador in Kosovo Greg Delawie a few days ago in which he says that the construction of the road near Dečani Monastery is illegal and that the issue was closed in 2014 (by the then Government decision on a bypass road). The Ambassador appeals on respect of the law.

Decani road issue was closed in 2014, and confirmed again two weeks ago. Kosovo law says road construction in front of the Decani Monastery is illegal. Respect the law.

Due to several extremist armed attacks and the aggressive behavior of Kosovo authorities Dečani Monastery has been placed on the list of 54 UNESCO most endangered World Heritage sites in the world. This shows very clearly the level of threat by Kosovo authorities for Medieval Christian monuments and why strong NATO led troops are for years stationed around this 700 years old Christian site in Europe. https://whc.unesco.org/en/danger/ 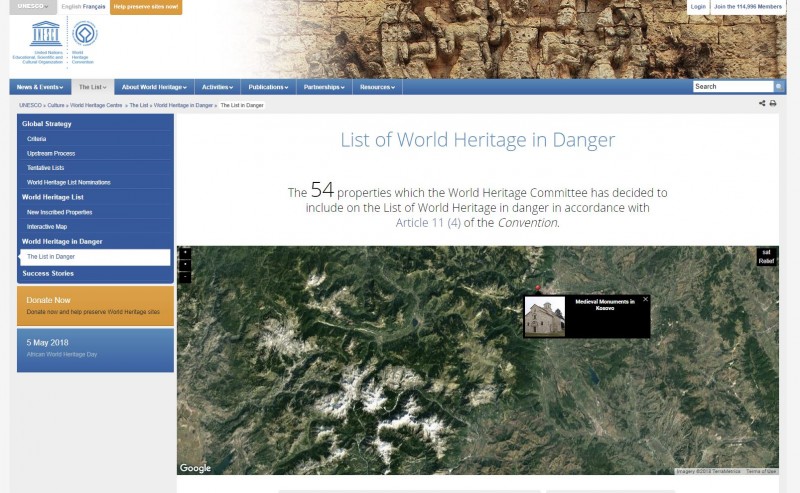 Photos showing the current construction works in the special protected zone. The sign that the works are being implemented by the Kosovo Ministry of Infrastructure can be seen just a few hundred meters from the Monastery within the protected zone.